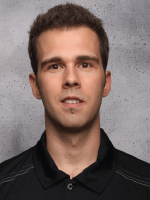 Elliot started his coaching career in 2008 with the Hudson Crusaders of the MNJHL and then would go on to spend a year with University Wisconsin River Falls.

In 2010 Elliot joined the Austin Bruins of the North American Hockey League. In 2012 he would add scout to his resume along with coaching as he joined the Victoria Royals of the WHL.

In 2019 Austin would join the staff of the New Mexico Ice Wolves of the NAHL.