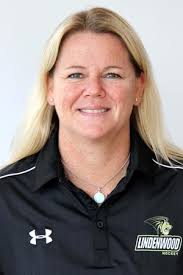 Shelley Looney will begin her second season as head coach of the women's hockey program at the start of the 2020-21 season.In her first season, Looney and the Lions compiled a record of 5-24-5, 3-15-2 CHA in 2019-20.  The Lions claimed four CHA Player of the Week honors, including three CHA Goalie of the Week accolades.  Lindenwood had a pair of players with double-digit points, including Sierra Burt who registered 11 assists to lead the team.  The Lions earned a 1-1 tie against No. 4 Clarkson University on October 25.  Lindenwood earned a two-game sweep against RIT on January 17 and 18, posting wins of 3-0 and 2-0, respectively.  It was the first time the Lions shutout a CHA opponent in back-to-back games since joining the league.  Lindenwood registered a 3-2 victory over the top team in the conference, Mercyhurst, on February 7. On November 1, 2019, Looney and the 1998 U.S. Women's Olympic Team was inducted into the 2019 U.S. Olympic & Paralympic Hall of Fame.  Looney scored the game-winning goal in the gold medal game, to secure the country’s first Olympic gold in women’s hockey.Looney came to Lindenwood after spending many years with USA Hockey, finding great success as a player and a coach.  In 1998, Looney scored the game-winning goal to lead the United States to an Olympic gold medal in Nagano, Japan.  Looney served as the head coach for the 2017 and 2019 World University Women’s National Team.  Looney was an assistant coach for the 2016 World University Women’s Hockey National Team.  She assisted the coaching staff for the 2010 U18 and 2004 U22 Women’s National Teams.  Looney has also worked as the Chief Evaluator at Annual District Development Camps, while serving as a head coach and coaching director of select development festivals. In her five years prior to Lindenwood, Looney served as the Director of Hockey for the Buffalo Bison Youth Hockey Organization.  Looney designed and implemented hockey development curriculum to help maximize the potential of boys and girls of all ages across 25 different teams.  Looney was a key contributor in the player recruitment at all college levels. In a feature aired on February 17, 2019 by NBC Sports, Looney was highlighted on the 21st anniversary of scoring the game-winning goal in the gold medal game of the 1998 Winter Olympics as part of celebrating 2019 Hockey Day in America.  Looney and the Buffalo Bison hockey organization was recognized by Discover Card for their commitment to empower girls and women through sport.  Discover Card awarded $10,000 to the organization and arranged a day with the Stanley Cup for the youth program. In 2016, Looney was named as the head coach of the girls’ varsity ice hockey program at The Nichols School in Buffalo, N.Y., a top 10 private preparatory hockey programs in North America. In 2015, Looney was co-head coach with the Buffalo Beauts of the National Women’s Ice Hockey League (NWHL).  The Beauts were one of four inaugural professional women’s teams, which included four USA Hockey National Team players.  Previously, the New Jersey Colonials brought Looney on board from 2006-12 as the girls coaching director. Looney spent the 2004-05 season as the assistant coach of the University of Vermont.  Prior to her time in Burlington, Looney was an assistant coach on the USA Hockey U17 Boys National Team Development Program.  During her playing career, Looney won the gold medal at the 2005 IIHF Women’s World Championships and a silver medal at the 2002 Olympic Games in Salt Lake City, Utah.  Looney is a seven-time silver medalist at the IIHF Women’s World Championships, and a two-time gold medalist at the IIHF 4 Nations Cup Tournament. Looney earned her Bachelor of Science degree in recreation and leisure studies from Northeastern University.